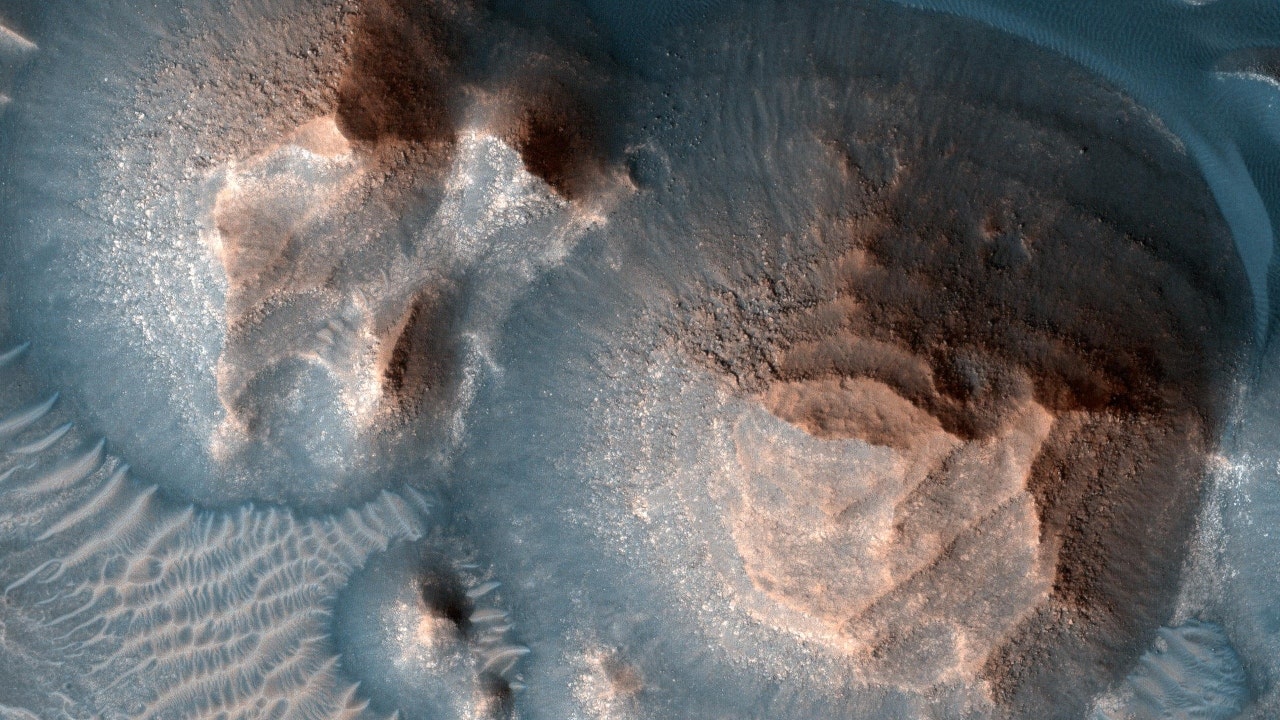 The so-called “super eruptions” occurred in a region of northern Mars called Arabia Terra over a period of 500 million years dating back approximately 4 billion years.

Researchers who studied the topography and mineral composition of the region made the discovery, and the news was published in a paper in the journal Geophysical Research Letters in July 2021.

“Each one of these eruptions would have had a significant climate impact — maybe the released gas made the atmosphere thicker or blocked the sun and made the atmosphere colder,” Patrick Whelley, a geologist at NASA’s Goddard Space Flight Center who led the Arabia Terra analysis, said in a release. “Modelers of the Martian climate will have some work to do to try to understand the impact of the volcanoes.”

The calderas were initially believed to be depressions from asteroid impacts, but scientists noticed in 2013 that they had signs of collapse and weren’t perfectly round.

“We read that paper and were interested in following up, but instead of looking for volcanoes themselves, we looked for the ash because you can’t hide that evidence,” Whelley said.

Working with Johns Hopkins Applied Physics Laboratory volcanologist Alexandra Matiella Novak, the team examined surface minerals and picked up from prior work that had calculated where ash from possible super eruptions would have fallen.

Using images from the Mars Reconnaissance Orbiter’s Compact Reconnaissance Imaging Spectrometer, they studied the walls of canyons and craters from hundreds to thousands of miles away from the calderas, identifying volcanic minerals turned into clay by water.

They made three-dimensional topographic maps of Arabia Terra and compared mineral data to the maps in order to see that the layers of ash were well preserved.

This image shows several craters in Arabia Terra that are filled with layered rock, often exposed in rounded mounds. The bright layers are roughly the same thickness, giving a stair-step appearance. The process that formed these sedimentary rocks is not yet well understood. They could have formed from sand or volcanic ash that was blown into the crater or in water if the crater hosted a lake. The image was taken by a camera, the High Resolution Imaging Experiment, on NASA’s Mars Reconnaissance Orbiter.
(Credits: NASA/JPL-Caltech/University of Arizona)

NASA will use calculations of how much material would have exploded from the volcanoes based on the volume of each caldera to determine the number of eruptions.

The question of how a planet could have only one type of volcano in one region remains.

“It’s possible that super-eruptive volcanoes were concentrated in regions on Earth but have been eroded physically and chemically or moved around the globe as continents shifted due to plate tectonics,” the NASA release states. “These types of explosive volcanoes also could exist in regions of Jupiter’s moon or could have been clustered on Venus.”