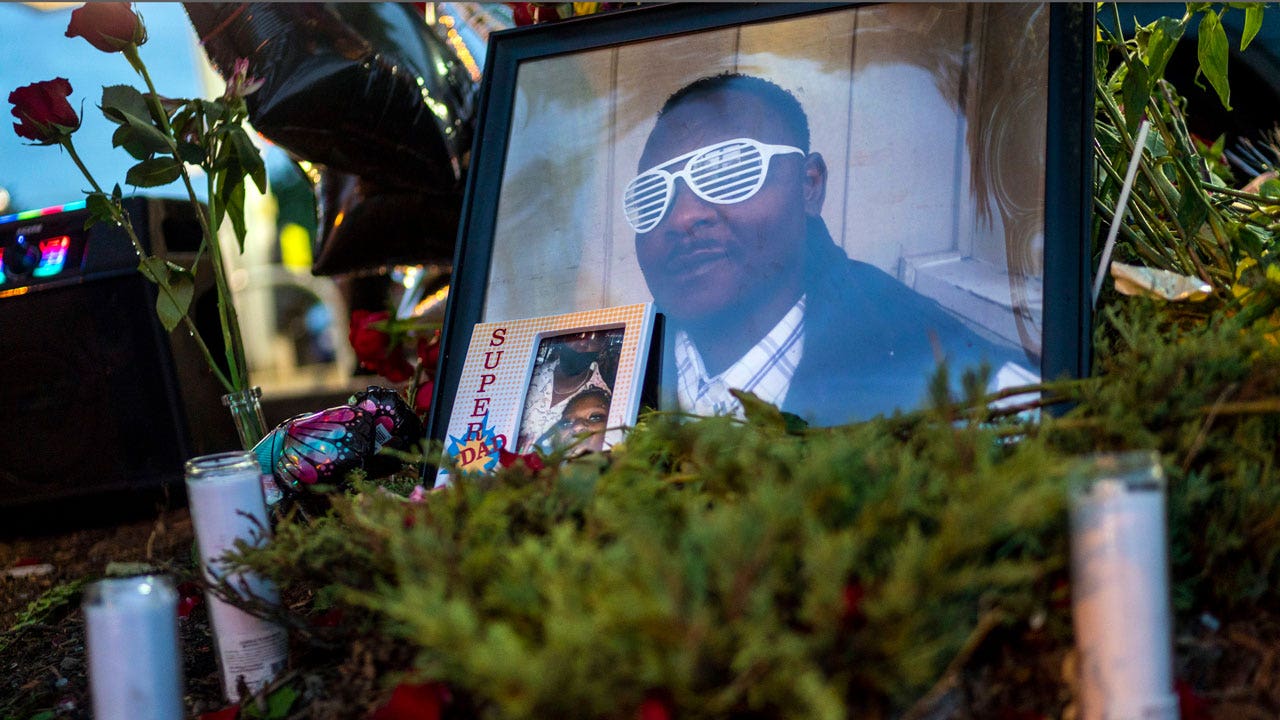 A Minneapolis police officer has been charged with manslaughter and vehicular homicide for a crash in July that killed an innocent motorist while the officer was pursuing a stolen vehicle, prosecutors said Friday.

Officer Brian Cummings was driving nearly 80 mph in Minneapolis with his siren and lights activated when his squad car slammed into another vehicle, killing 40-year-old Leneal Frazier, Hennepin County Attorney Mike Freeman said in a statement.

The crash ended a chase that spanned more than 20 blocks and roared through residential neighborhoods where the posted speed limit is 25 mph.

“Police are supposed to protect and serve citizens and to act in a manner consistent with their sworn oath to do so. Officer Cummings’ actions deviated from his oath and his negligence caused the death of Leneal Frazier,” Freeman said.

in this July 7, 2021 file photo, Items rest at a memorial for Leneal Lamont Frazier, in Minneapolis, at the site of his death. Frazier died early Tuesday, July 6, after his vehicle was struck by a squad car that police said was pursuing another driver linked to several robberies. A Minneapolis police officer has been charged with manslaughter and vehicular homicide in a fatal crash in July that occurred while the officer was pursuing a stolen vehicle, a prosecutor announced Friday, Oct. 22, 2021. (Antranik Tavitian/Star Tribune via AP File)
(Antranik Tavitian/Star Tribune via AP File)

During Cummings’ chase, Frazier’s Jeep entered an intersection on a green light. According to investigators, the driver of the stolen vehicle narrowly missed the Jeep before the squad car struck it on the driver’s side.

An accident reconstruction report said the fatal collision “can be attributed to the Defendant for failure to operate his vehicle with due regard for the safety of other motorists.”

Mayor Jacob Frey said after Frazier’s death that the city would review its police pursuit policy, and that review was still ongoing Friday.

A police spokesman said in the summer that the policy wasn’t violating during the chase, but prosecutors clearly disagree.

They cited the policy in their statement: “Officers shall not initiate a pursuit or shall terminate a pursuit in progress if the pursuit poses an unreasonable risk to the officers, the public or passengers of the vehicle being pursued who may be unwilling participants.”

Cummings’ attorney, Tom Plunkett, said the officer was pursuing a suspect in a “violent carjacking” and that the occupants had been “on a crime spree, a practice that has unfortunately become too common in Minneapolis.”

The city’s police union didn’t immediately respond to a request for comment.

Frazier was the uncle of Darnella Frazier, whose cellphone video of Minneapolis police Officer Derek Chauvin kneeling on George Floyd’s neck was viewed worldwide and helped launch a global protest movement against racial injustice. Chauvin was convicted of murder and sentenced this year in Floyd’s 2020 death.

In the July 9, 2021 file photo, from left, Cheryl Frazier, sister of Leneal Frazier; Orlando Frazier, brother of Leneal; and Jamie Bradford,, daughter of Leneal, embrace one another during a news conference outside of City Hall in Minneapolis. Leneal Frazier was killed earlier in the week after his vehicle was struck by a squad car that police said was pursuing another driver linked to several robberies. Frazier was not involved in the pursuit. A Minneapolis police officer has been charged with manslaughter and vehicular homicide in a fatal crash in July that occurred while the officer was pursuing a stolen vehicle, a prosecutor announced Friday, Oct. 22. (Antranik Tavitian/Star Tribune via AP File)
(22. (Antranik Tavitian/Star Tribune via AP File)

The Frazier family, which had called for Cummings to be prosecuted, welcomed the charges as a first step toward justice, according to their lawyers, Ben Crump and Jeff Storms.

“The Frazier family and our legal team are grateful for the charges brought against Brian Cummings for the reckless killing of Leneal Frazier,” they said in a statement. “We commend the Hennepin County Attorney’s Office for having the courage to hold law enforcement accountable in this instance. No innocent civilian should ever lose their life because of unwarranted high-speed chases in residential neighborhoods.”

Both charges against Cummings carry a presumptive prison sentence of four years under state sentencing guidelines. Jail records show he was released on his own recognizance and has a hearing set for Nov. 9.

The department’s policy manual allows pursuits for “serious and violent crimes.” including robbery, and “flagrantly reckless driving that is life-threatening to the public.” The criminal complaint said the stolen vehicle was suspected in thefts from businesses that involved “some limited use of force” but none involving weapons or resulted in injuries. Chases for simple auto theft are not allowed.

Freeman made a fresh plea Friday for law enforcement across the state to change their pursuit policies, saying they don’t do enough to protect human life. He said responses to previous criticism had been “weak and ineffective.” He said Minnesota agencies reported 40 fatal injuries resulting from pursuits from 2013-2020.

“This must stop,” Freeman stated. “Pursuits must be reserved for only the most serious crimes and cases.”

The charges against Cummings came a day after former Minneapolis police Officer Mohamed Noor was resentenced on a manslaughter charge in the 2017 death of Justine Ruszczyk Damond, who was shot minutes after she had called 911 to report a possible sexual assault in the alley behind her home. They also came ahead of a Nov. 2 vote in which Minneapolis residents will decide whether to replace the city’s police department with a new public safety unit.