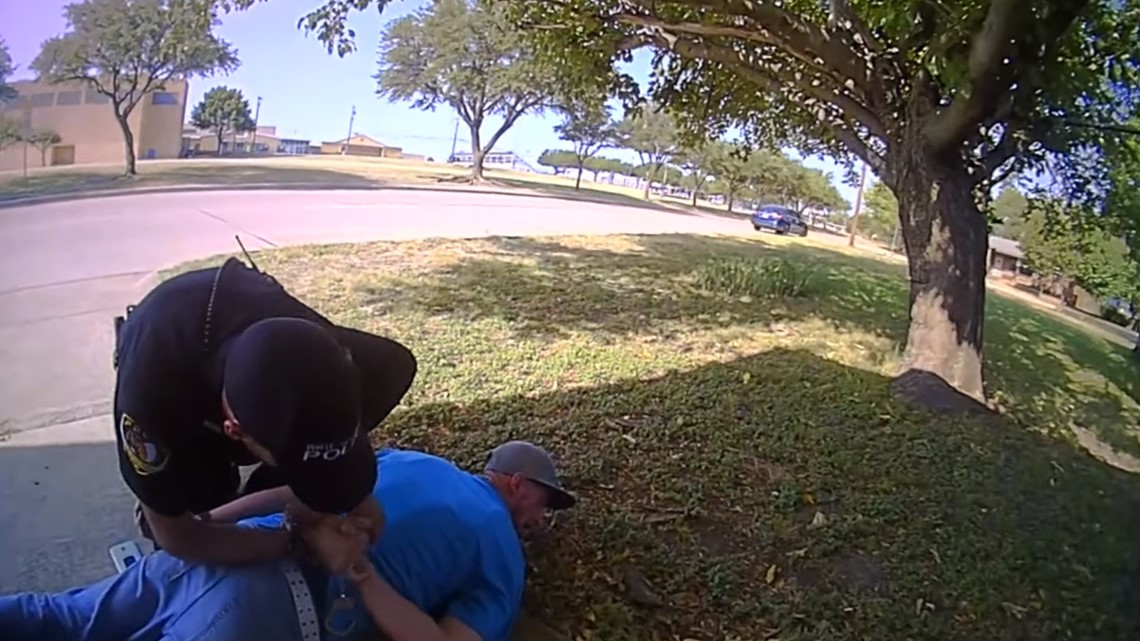 “Together, WSPD and our community, we are strong,” read a post from the department. “We are so very appreciative,” Chief Chris Cook added.

WHITE SETTLEMENT, Texas — A good Samaritan helped a White Settlement police officer during a pursuit to capture a suspect wanted in connection with stealing a vehicle over the weekend.

The entire incident was caught on the officer’s body camera.

The White Settlement Police Department has been using its ‘Flock Safety System’ to help recover fugitives and stolen vehicles throughout the community.

The system is a license plate reader with a camera, and on Saturday, June 18, two officers responded to a report of a stolen vehicle spotted in the 700 block of South Cherry Lane.

“The license plate was shown to be a stolen vehicle,” White Settlement Chief Chris Cook said.

As the officers tried to initiate a traffic stop on the vehicle near an auto shop, the suspect bailed out on foot and started running from the scene.

A good Samaritan saw one of the officers, Corporal J. Porter, running and offered him a ride.

Another cop for the department, Officer Samuel Brown, was also involved in the foot chase and was ahead of Porter — hot on the suspect’s tail.

“It’s hot outside, they have heavy gear on, and sometimes some of us have better cardio than others. I’m in that camp too. I probably would have needed a ride sooner than the corporal did,” Chief Cook said.

“I appreciate it,” Corp. Porter said through his body camera footage as he gave the good Samaritan directions to the location where the suspect was spotted.

Porter then quickly caught up to the location where the suspect was being taken into custody by Brown.

“Had to get taxied, don’t mind me,” Porter jested as he monitored the arrest of the suspect.

Officer Brown said Monday that he laughed seeing his colleague step out of a citizen’s vehicle.

“I look over my shoulder, trying to see who’s coming up on me, and then I see Porter jump out of the car. It was pretty funny,” Brown said.

The White Settlement Police Department extended a big thank you to the good Samaritan in a post with a video of the pursuit on its Facebook page Sunday night.

We continue to recover fugitives and stolen cars from our Flock Safety System. On Saturday, two WSPD Officers responded to a stolen car in the area of 700 S. Cherry Lane. As the officers attempted to initiate a traffic stop, the bad guy bailed on foot and ran…. and ran… and ran some more… before Officer S. Brown and Corporal J. Porter were able to take him into custody. We got a little help from an unknown Good Samaritan who saw Corporal Porter running and offered him a ride… Corporal Porter took the man up on the offer and quickly arrived at the apprehension location. Whoever this man was…. a big thank you!!! Together, WSPD and our Community, we are strong. Great job in getting this guy off our streets with 4 charges (3 felonies and 1 misdemeanor). We were also able to return the car to the rightful owner. #WSPDTV #WSRocks #CanRunButCantHide

“Together, WSPD and our community, we are strong,” read a post from the department. The department also thanked the officers who could get the suspect off the streets.

The Samaritan, Jimmy Davis, spoke to the media on Monday, saying he saw the chase and decided to help the officer.

Davis is a former security guard.

“My instincts just kicked in,” Davis said. “I was glad I was at the right place at the right time. I did what I had to, and I would do it again.”

The suspect, 31-year-old Joshua Taylor Brown, has been charged with three felonies and one misdemeanor, including evading arrest and unauthorized use of a vehicle.

WSPD said the stolen vehicle was returned to its rightful owner.