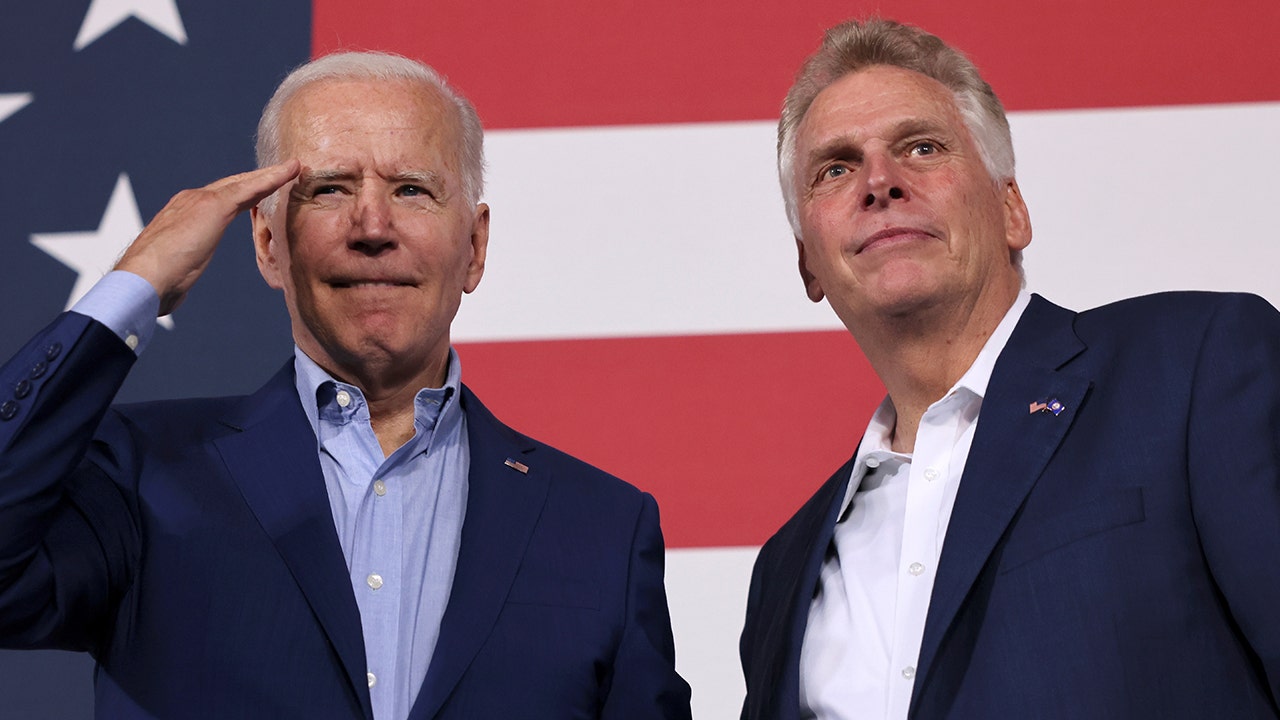 But as McAuliffe continuously tried to link Youngkin with the former president in a state that Trump lost by 10 points last November, he didn’t appear to mention President Biden‘s name in either showdown.

Biden cruised to victory in Virginia last year. But the decay of the president’s approval ratings over the past eight weeks, along with the inability of the White House and moderate and progressive congressional Democrats to agree on the party’s massive social spending and climate change agenda, are key factors in a close gubernatorial race with national implications, with less than five weeks to go until Election Day.

“Complacency driven by what’s happening in Washington and with the Biden administration is the biggest threat to McAuliffe and is the driving reason why we moved the race to a toss-up last week,” Jessica Taylor, the Senate and governors editor for the top nonpartisan handicapper The Cook Political Report with Amy Walter, told Fox News.

The president’s flagging numbers came in the wake of Biden’s much criticized handling of the turbulent U.S. exit from Afghanistan. And it also came amid a surge in COVID cases this summer among mainly unvaccinated people due to the spread of the highly infectious delta variant, as the nation struggles to combat the coronavirus, the worst pandemic to strike the globe in a century. The plunge in the president’s approval was also compounded by the latest surge of migrants trying to cross into the U.S. along the southern border with Mexico.

“Coming off the difficult month the Biden administration’s had with Afghanistan, the border, delta surging, all of this has sort of created a perfect storm and it’s resulted in a drop in Biden’s approval ratings. Even in a state where he won by 10 points, he’s underwater right now,” Taylor noted. “And that’s a really precarious situation for a race that’s just over a month from now.”

TRUMP NOT ON STAGE, BUT FRONT AND CENTER IN VIRGINIA, NEW JERSEY, GUBERNATORIAL RACES

The intra-party battle between progressives and moderate Democrats on Capitol Hill is also a contributing factor.

At Tuesday’s debate, McAuliffe appears to distance himself from his national party. When asked if he supports the $3.5 trillion spending package that the White House and congressional Democrats – who hold razor-thin majorities in both the House and Senate – are trying to pass along party lines using a parliamentary process known as reconciliation, McAuliffe said he thought the figure was “too high.”

But he urged Congress to pass the separate $1 trillion bipartisan infrastructure bill. “They’ve got to stop their little chitty-chat up there, and it’s time for them to pass it,” the former governor emphasized.

An average of the the most recent polls compiled by Real Clear Politics shows McAuliffe with a three-point edge over Youngkin. A Fox News poll in Virginia will be released Thursday evening.

Virginia and New Jersey are the only two states that hold gubernatorial races in the year after a presidential election, and thus grab outsized attention. And the contest in Virginia, once a top electoral battleground that’s still competitive, is seen as a key barometer ahead of next year’s midterm elections, when control of Congress will be up for grabs.

Virginia has shifted blue over the past decade, and it’s been a dozen years since Republicans won a statewide election in the commonwealth. There’s also a long-running trend of Virginia voters defeating the party that controls the White House. McAuliffe temporarily broke that tradition in 2013 with his election as governor. Virginia governors are barred from serving two straight terms.

A Democratic strategist connected to the Virginia gubernatorial showdown told Fox News that “everyone knew that it was going to be a close race.”

The strategist, who asked to remain anonymous to speak more freely, acknowledged that “Terry is running along Biden’s agenda, especially when you look at COVID.”

Asked whether Biden is weighing McAuliffe down, the strategist said, “I’m still confident in our position but obviously it is a close race and we have to treat it as such.”

With so much on the line, the Democratic National Committee (DNC) is taking nothing for granted, making a $5 million investment in the race. It’s the most the DNC’s spent in Virginia, and a huge sum – thanks to improved fundraising – compared to the $1.5 million they spent on the 2017 Virginia gubernatorial election, won by then-Lt. Gov Ralph Northman by nine points.

With Younkin, a first-time candidate and former CEO of a large private equity firm who’s been endorsed by Trump, trying to keep some daylight between himself and the former president, his campaign has not overtly tried to link McAuliffe to Biden.

A  Virginia GOP official told Fox News that “Virginians know that Terry McAuliffe is tied to Joe Biden and that’s going to continue to nag at him, but he has his own reasons that he’s losing and Virginia Republicans are going to make those reasons clear over the next month.”

Biden last teamed up with McAuliffe on the campaign trail in late July in the voter-rich and heavily Democratic Virginia suburbs of Washington, D.C. The McAuliffe campaign says that as of now another Biden-McAuliffe rally has not been scheduled.